Loathe Your Neighbor by D.A. Cairns 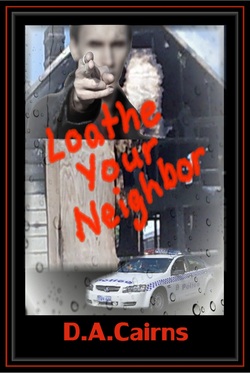 David Lavender is a man with a talent for making bad decisions. In his fortieth year on planet Earth, a dangerous restlessness overwhelms him, and, as his marriage crumbles, and a dispute with his neighbor escalates, he responds to theses crises in his life with characteristic folly. Frozen out by his mysteriously indifferent wife, Lilijana. Baited by his cantankerous stepson, Tomo, and alternatively supported and rebuked by his two best mates, Matt and Chalkie, will David successfully negotiate the minefield which his own discontent constructed, or will he destroy himself and everyone around him?

Reader Reviews:
"I finished reading your book on the train this morning.  I wanted to let you know how much I enjoyed it. I liked the way you wrote it in such a way as to maintain a
tension throughout the whole story.  All the characters were very believable.  I thought you very accurately depicted the human flaws in each of us, particularly, the main man, David.  And I liked the fact that he had a solid friendship with his mates.

I kept saying to David, don’t do it, don’t do it!! Whenever he went near “Phil” or Julia.  But the best part of all was the last sentence – it was a killer!  Did he really learn anything at all? – that’s the question I took from it. Looking forward to the next one."  - Wendy Rayner

I really enjoyed the book as I am sure anyone reading it would say, that it really made one look within because at different stages of life, I am sure everyone grapples with feelings such as David and his wife deal with. It really flowed and I found it hard to put down. I am used to reading Michael Connolly, James Patterson, Nora Roberts etc, and like the psychological bent of these writers. So LYN was a different look at people’s psych to the other books I read. It made you wonder how deep of a hole David was going to dig." - Iris De Kiefte

" a blackly humorous tale related from the point of view of its introspective antihero David Lavender. David appears to be making a hash of some relationships in his life but rarely understands or acknowledges his own part in this. There is a sense of impending catastrophe as he lurches from one botched encounter to another, until he is forced through an inevitable crisis into attempting to retrieve some of what has been lost. A number of things stand out in this book. Despite securing little of our sympathy, David is recognisably a character who one imagines can easily be found in workplaces, pubs and neighbourhoods. As such, he is well-drawn, being both difficult to like but still relatable and authentic. Like most of us, except for the occasional brain-snap, he is, in his own mind, doing okay with the cards he has been dealt. The plot is fast-paced and compelling, the style light, but with some challenging themes which provoke consideration long after the reading is complete."   - Alison Chappelow

"...thoroughly enjoyed it. The story really sucked me in and this is definitely one book that
I found hard to put down. The book made me angry, surprised and left me feeling very angry with the last paragraph.
Once you think that it's OK to pursue the thought of "the grass is greener on the other side of the fence". Then there will me no turning back, once damaged always damaged.
Thank you again for a fantastic read. The past couple of days have been a rollercoaster of emotions, that only an excellent writer can create." – Craig DJStyx Mansell VoxFM106.9

"This second novel from D.A. Cairns mixes wry, sarcastic humor with infidelity and neighborhood drama. David Lavender's constant preoccupation with his neighbor, whom he's dubbed the Chainsaw Massacrer of Chinaman's Hollow, and his frustrated sexual passions lead him down a road of risk, betrayal, and violence. In a way, he betrays himself by becoming someone he never imagined he'd be. His life is not far removed from everyday human experience, but it's about to change drastically--and not for the good.

This is a bold, compelling read with well-drawn characters anyone can relate to: friends, family, a lover and, above all, neighborhood enemies."  - Jeanne Haskin

"I've finished the book now. Loved it! but it stopped me from doing the million things on my 'to do' list!!  What a great ending! The last line was just fantastic, ambiguous but loaded with meaning!  For me, the mark of a good book, besides being something you really want to read, obviously, is that you think about the characters when you're not reading it. Kind of like you're living in their world for a while. And you empathise with them and understand their motivations. I'm not a book critic and I don't know how to write a review, I just like what I like."
- Christine Dashwood

"The style of writing is very descriptive and I could picture each scene as it unfolded. The story has many twists and turns which had me eagerly turning the pages. The book has a very interesting ending, leading to a follow on book perhaps." - Frances Cairns